The Bottom 10 inspirational thought of the week: 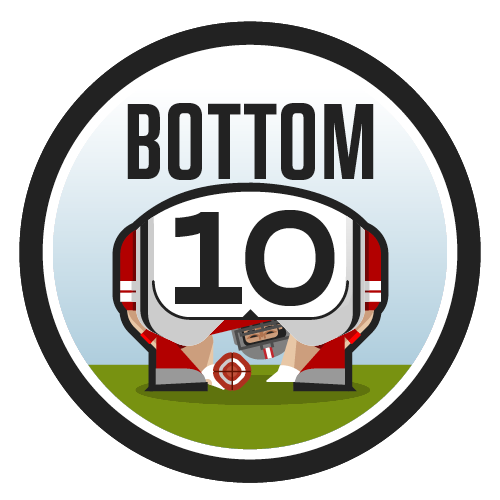 Bobby played his guitar on the harder side of town
where it’s hard for a poor boy to find the money.
He had dedication.
He had the heart and soul.
Somehow knew he was born to play.

People said, “Get a real job, support your family
’cause there’s no future in the road you’re takin’.”
He never said a word. The dreamer just kept on.
Later at night you could hear him sing.

— “I’m Gonna Be Somebody” by Travis Tritt

There is a definite pecking order to life on the ESPN college football totem pole. At the top, you have College GameDay and whatever game Chris Fowler is calling. At the bottom, you have games televised using an old SVHS camcorder and an internet voice translator as the play-by-play guy. Then, 6 feet below that, at the bottom of the trench where Nick Saban tosses his rat poison, is where you’ll find the Bottom 10.

But for one glorious week that changed.

The tone was set when ESPN Stats & Information sent out its weekly preview stat pack. At the bottom of the last page it mentioned “Ryan McGee will be in attendance for the Bottom 10 championship between UTEP and Rice.” Was I actually going to be in attendance? No. But that didn’t matter. We’d made the stat pack.

The days that followed brought a torrent of requests from throughout the Worldwide Leader, seeking analysis of the biggest-ever Pillow Fight of the Week. ESPN CFB Head Number Cruncher Brad Edwards sent along some intel from a friend at Conference-USA. ESPNU Radio had me on, as did radio stations on both sides of Texas. Did they all accidentally call me “Marty”? Yes. But that didn’t matter. We’d made the airwaves.

On Saturday, I did national radio, television and podcasts. I was stopped in the parking lots of Texas Tech with Bottom 10 score updates. On the sideline of Jones AT&T Stadium I was congratulated on the enormity of the game by an Oklahoma staff member. Did he think the game was between Texas State and Lamar? Yes. But that didn’t matter. We’d been recognized during pregame of a much bigger game.

UTEP jumped out to a 27-0 lead. Its 20-game losing streak was going to end. Maybe. Rice scored three touchdowns in the fourth quarter and was marching for a fourth! But a Miner interception iced the 34-26 victory and chiseled the Bottom 10’s five days of fame into that ice.

@ESPNMcGee gets a shout-out on ESPN Goal Line as UTEP wins the Bottom 10 national championship game.

An hour later, that ice was melted. Some other game kicked off in Baton Rouge — and the Bottom 10 descended back beneath the totem pole. For now. But we’ll always Houston on November 3, 2018.

With apologies to the Underminer and Steve Harvey, here’s the Bottom 10 for Week 10.

The new owners of the nation’s longest losing streak (nine) will spend the next two weekends traveling to Louisiana Tech and LSU. Um, excuse me RU schedule makers, but y’all do realize how much Rice they eat in Louisiana, right?

Looking back, perhaps we didn’t do enough pregame hyping of the nightcap half of Saturday’s Bottom 10 doubleheader, when the Huskies hosted Living on Tulsa Time, a fellow 1-7 member of the American Athletic Conference of American Athletics. The Golden Hurricanes stormed back from a 10-0 deficit to win 49-19. However, UConn coach Randy Edsall was able to collect another “we scored first” bonus via his incentive-packed contract, bringing his season total to $10,000. In related news, sources tell the Bottom 10 that he has not collected many “we scored last” bonuses.

After reading all of the above, what do you think it was like when the Miners returned home to El Paso? It was just as awesome as you would’ve hoped.

The undercard to the two games we’ve already mentioned was actually played five days earlier, when Boiling Green fell to fellow 1-and-7’er State of Kent on a Tuesday night. This week’s Falcons Bottom 10 showcase returns to the Saturday stage, when BGSU travels to CMU in the Pillow Fight of the Year of the Week: Episode VI: Return of the Mack…tion.

This week’s Coveted Fifth Spot is filled by a Florida Six Pack. Flori-duh got swamped by Missouri. Flori-duh State suffered its worst-ever loss to NC State. US(not C)F was drowned by the Tulane Green Wave. Duke yanked Miami’s turnover chain away and flogged them with it. Feel-good story FI(not A)U was a heavy favorite in the Shula Bowl, but was Kiffin’d by three-win FA(not I)U. Meanwhile, undefeated UC(not S)F received the same kind of love from the College Football Playoff selection committee that Rotten Tomatoes showed for “Johnny English Strikes Again.”

How big is this weekend’s visit from Boiling Green? CMU has scheduled a rare Week 12 bye in order to provide itself with some post-Pillow Fight of the Week recovery time. Or maybe it’s recovery time for the rest of us. OK, maybe it’s just for me.

When I was in middle school, I decided to join an after-school Duran Duran Fan Club. For decades I carried the burden of Worst Membership Decision Ever. Then Rutgers joined the Big Ten and let me off the hook.

With a huge Bottom 10 showdown against UTEP looming on November 17, they can’t afford to let this weekend’s matchup with FAU turn into a trap game. Or, as they call it at WKU, a game.

The Bottom 10 Stats & Info team, aka my retired sixth grade math teacher Mr. Hester, had expressed some curiosity as to whether or not UNLV could bounce back from its Week 9 loss to then-winless San Jose State, but they lost to Fresno State, 48-3.

I’ve been working the phones of both the AAC and the ACC to see if we can’t add a last-minute December matchup between Louisville and UConn. We’d call it the Big East Congeniality Bowl, and honestly, the game would take a backseat to the postgame handshake between Bobby Petrino and Randy Edsall. It would be like that scene in “Avengers: Infinity War” when Thanos met the Red Skull, only scowlier.