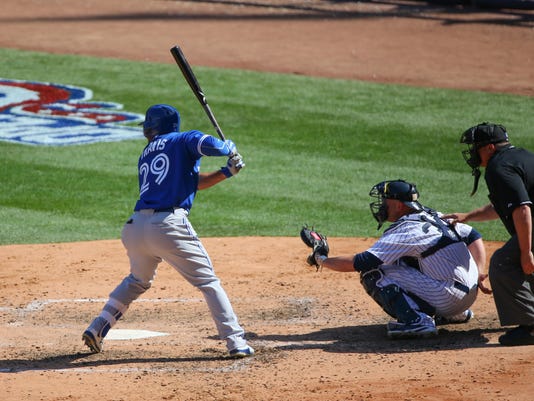 He’s preparing for his fifth Major League season, all with the Toronto Blue Jays, after being tendered a $2.4 million contract from the club last month. His knees are sound and he has focused on regaining his hitting stroke after last season’s struggles.

Travis is especially pumped about the news concerning his younger brother Jordan.

“I am so excited. I obviously love Florida State a ton,” Devon said. “I follow their football games like I am still there. Now to follow my brother there, to see him put on a FSU uniform is so exciting for our family.”

Travis, who spent this past fall as a freshman at Louisville before announcing he intended to transfer, is scheduled to enroll at FSU next month and is expected to participate in spring practice.

Though Travis will likely have to sit out next season under NCAA transfer rules, he is expected to fortify the Seminoles’ depth chart at quarterback.

Devon was a three-year starter and an All-American at second base for the Seminoles from 2010-12.

Without fail, every weekend, the Travis family – including Jordan – would pack up the car and make the 400-mile trek from West Palm Beach to catch Devon’s games with the Seminoles.

“Jordan was probably 8 years old and in the (Howser Stadium) stands watching me play,” Devon said.

“He always dreamed about being a football player at FSU one day. Now to see his name on the back of an FSU jersey in Tallahassee and watch him run out of tunnel (at Doak Campbell Stadium), that is going to be so cool.”

Jordan Travis was a three-star prospect and passed for 2,190 yards and 24 touchdowns as a high school senior The Benjamin School. He played sparingly as  a freshman at Louisville, completing 4 of 14 passes for 71 yards, one touchdown and one interception. He rushed eight times for 40 yards.

Devon described his younger brother as a “calm and cool kid. He’s quiet but confident.”

While Devon will have to wait for the start of FSU football, he has been busy getting ready for the upcoming MLB season.

Travis also is participating in the Blue Jays’ ninth annual Winter Tour (meet and greet with fans) next month. Travis will report to spring training in February in Dunedin.

After contending with a number of injury issues – specifically with his knees – during his first four MLB seasons, Travis played in a career-high 103 games last season for the Blue Jays.

Known as a contact hitter adept at spraying the ball around the field, Travis, however, never recovered from a slow start offensively and hit just .232 with 11 home runs and 44 RBI.  He was a .300 hitter or better in his first two MLB seasons (2015-16).

“I really never got into a rhythm the whole year at the plate; it seemed like I was always playing catchup,” Travis said. “It’s such a humbling game. You might be on top of the world one day, and the next three days you literally lose everything you thought you had mastered.  I felt pretty crappy the entire year (offensively) It was not a fun year.”

Travis, 27, known for his positive, upbeat personality, continues to treat each day as a learning experience. He’s still thankful to be playing a game that he loves.

As a toddler, Travis used to wear his older stepbrother’s baseball jersey around the house.  One day, Travis hopes to watch his younger brother Jordan start at quarterback for the Seminoles.

“Baseball is hard enough when you are healthy,” Travis said.

FSU Football: Ranking the Top 3-Stars of the Last 10 Years
Willie Taggart not calling plays is the right move