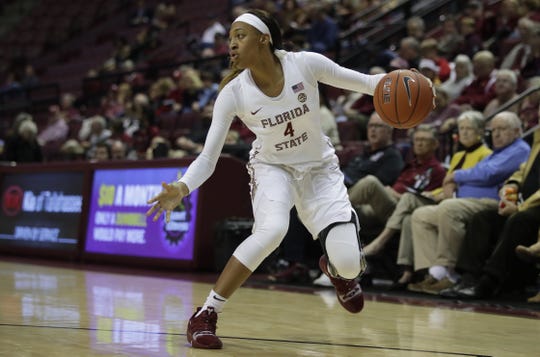 Florida State freshman guard Amaya Brown is part of a fantastic freshman class that has made a noteworthy impact for the Seminoles thus far. (Photo: Tori Schneider/Tallahassee Democrat)

Headed into the 2018-19 season, Florida State women’s basketball head coach Sue Semrau and her staff had five players leave either due to graduation or being drafted into the WNBA. Those five included Shakayla Thomas, AJ Alix, Chatrice White, Imani Wright and Ama Degbeon.

For this reason, coach Semrau and her assistants had to find players who could get close to recreating 4,544 minutes, 1,984 points and over 600 rebounds. With five leaving, a new set of five freshman came in. Kourtney Weber, Amaya Brown, Morgan Jones, Valencia Myers and Izabela Nicoletti rounded out the newcomers.

Thus far this season, four of the five freshman have played in all 17 games. Izabela Nicoletti wasn’t able to play as she suffered a season-ending knee injury during off-season workouts.

With conference play getting underway, the ’Noles currently sit at 15-2 overall (3-1 ACC). Though their two losses were difficult to swallow considering both times FSU fell while they were ranked in the Top-25. 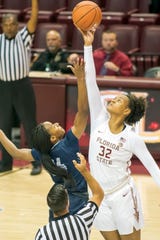 Despite a 58-45 loss to LSU which was subsequently followed by a 10-game win streak, along with a loss to Clemson by the score of 57-45, these girls have been able to bounce back from the few hardships they’ve experienced this season.

“You definitely learn the most from a loss, I think it’s more impactful on you,” says freshman guard Kourtney Weber. “It definitely makes you want to work harder in practice the next day.”

So far, a couple freshman have been able to start the majority of games they’ve played in. Forward Valencia Myers and guard Kourtney Weber have clocked in nearly 400 minutes apiece. Myers has started in everyone of the Seminoles’ contests thus far, while Weber has started in all but one.

“I came to FSU mainly for the coaching staff, they said that I would make a difference,” says Myers. “I’m still fighting and working harder to make even more of an impact than I already have.”

Myers, the Ohio native, has been a force to be recon with this season. Through 17 games, she has racked up 156 points, 119 rebounds and a team-leading 27 blocks. Weber on the other hand, has been a solid option as well for the ’Noles. Shooting 35% from field goal range, dishing out 20 assists, as well as a perfect 6-6 mark from the free-throw line.

When asked about how they would grade themselves at the midway point of the season, Myers says “I think we—coach Semrau and herself—both rated me as slightly above average, so like a B-.”

Weber felt about the same regarding her midseason grade.

“Probably a B, I’ve been doing a lot of good things for the team. I definitely think I can do a lot better.” 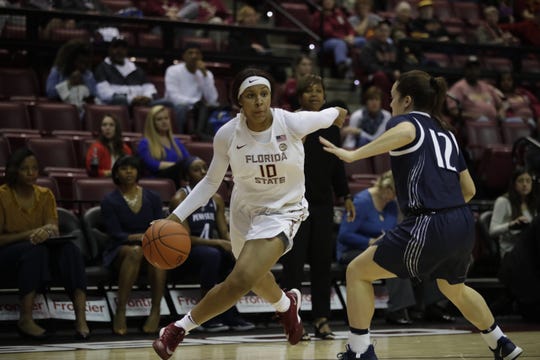 Florida State freshman guard Kourtney Weber has started in all but one of the Seminoles games this season. (Photo: Tori Schneider/Tallahassee Democrat)

Not only have these two freshman been contributing to the team but guards Morgan Jones and Amaya Brown have also been playing well off the bench. The two have combined for a 44% field goal percentage and have put up over 50 points.

Moving forward, not only for this season, but for years to come, these talented youngsters will be the backbone of Florida State’s roster.

Once they develop and hit their stride, it’ll only be a matter of time before the Seminoles continue to hang banners in the rafters at the Tucker Center.

“I think they’re relishing in it, but I also think that they’re taking it extremely seriously,” Semrau concludes. “They know it’s precious time, and they’re using it to really grow in the meantime.”