With the addition, FSU’s 2019 recruiting class is ranked No. 2 in the ACC.

A link has been sent to your friend’s email address.

A link has been posted to your Facebook feed. 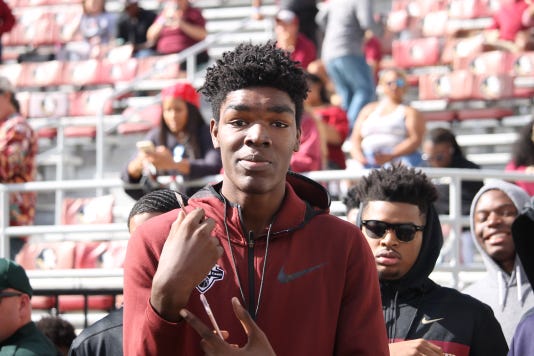 The Seminoles landed a commitment from 2019 three-star center Naheem McLeod out of Plymouth Meeting, Pennsylvania.

McLeod announced his decision Monday night after taking an official visit to FSU the weekend of FSU’s second preseason exhibition and the Clemson football game on Oct. 27.

He chose the Seminoles over his other finalists of LaSalle and Rhode Island and is currently the No. 182 overall player and No. 35 center in the 2019 recruiting class.

Standing seven feet tall and weighing 195 pounds, McLeod projects as a center, a position of need in the Seminoles’ recruiting class with Christ Koumadje in his final year of eligibility this season.

More: Florida State focusing on itself in prep for all-important UF game

More: FSU Bowl Outlook: Nothing clear with ACC in chaos

More: Notebook: FSU shows discipline on 4th-and-1 against BC

More: No. 5 Florida State survives No. 6 USC to win in penalty kicks

With the addition of McLeod, FSU’s 2019 recruiting class is No. 13 in the 247Sports Composite Class Rankings and No. 2 in the ACC behind only Louisville.

From The USA TODAY NETWORK

These sites are part of the USA TODAY NETWORK. Their content is produced independently from our newsrooms.