A champagne toast is optional, but Willie Taggart celebrates his one-year anniversary at Florida State Wednesday.

It was a year ago – Dec. 5, 2017 – when Taggart and FSU agreed to a six-year deal worth $30 million to bring the Florida native home. The Seminoles’ first head coaching search in more than four decades in football lasted less than a week.

Taggart was formally introduced to Seminole Nation on Dec. 6, starting his career with a Tomahawk Chop as he stepped from a vehicle outside Doak Campbell Stadium.

Taggart shared his energy, passion and philosophy with fans, boosters, and the media. The Palmetto native expressed with a mega-watt personality and smile that FSU was his dream job. Though Taggart had been a head coach at three different schools over the last calendar year, he promised he was at FSU for the long haul.

Well, here we are, a year later and – though we can’t turn back the hands of time – the same question remains:

Is Willie Taggart the right man for the job?

FSU’s hierarchy – on and off the record – says emphatically, yes, he is.

The bosses remain confident in Taggart’s abilities and vision. Taggart has been described as  genuine and charismatic in all the right ways, a rebuilder of programs. Nobody is going to argue those points.

Taggart is a touchdown favorite off the field.

His impact at FSU has resulted in a renewed commitment from his players to academics and an increased responsiveness with regard to daily decorum and community service. Taggart has shown a willingness to explore scheduling high-profile opponents and making sure players know and respect the history of the institution, athletics department and the Seminole Tribe.

The guy is special because of his dedication, hard work and sacrifice.

He is proud to be a Seminole.

Taggart must raise his game and the program to another level on the field before it’s too late.

It has been a topsy-turvy 12 months for Taggart, filled with highs, lows and in-betweens.

Seminole Nation was so in love with Taggart during the honeymoon phase.

Yet that newness and excitement have faded following a disappointing 5-7 season that ended the program’s NCAA-record 36 year run of bowl game appearances and left it with its first losing season since 1976. Fans stayed away as average home attendance dipped into the low 70K, directly and alarmingly affecting financial budget lines.

Florida State Willie Taggart glances at the scoreboard as the Notre Dame Fighting Irish put up 32 points in the first half against the Seminoles in South Bend on Saturday. (Photo: Andrew Salinero/FSView)

We all know the shortcomings on the roster that Taggart inherited. We all know he had to hire his staff in lickety-split fashion and save the Seminoles’ crumbling recruiting class three weeks into his new gig last year.

Once knee-deep into the job, Taggart also realized his players had difficulty to adapting to new schemes. He discovered that changing the program’s culture was not an easy task, often saying he thought his team was mentally weak.

Those are fair assessments. But Taggart has publicly made pleas for more effective, vocal leaders in the locker room or expressed dissatisfaction with toughness with his teams at previous coaching stops, too.

The question is was FSU out-played or out-talented this season?

Tallahassee isn’t like any previous stop for Taggart. FSU is a three-time national champion. The spotlight is brighter and hotter. Demands and responsibilities are different and greater.

Taggart’s Seminoles repeated mistakes and didn’t appear to adjust to their strengths this season. They looked overmatched and disorganized at times. Even game management on the sidelines – who were all those people? – appeared uneven. Upset fans felt players were more interested in dance moves, uniform combinations and that backpack than winning games.

Taggart has control and responsibility over the Seminoles’ preparation and behavior. There’s an old coaching adage that a team is a reflection of its coach.

Learning curves are not optional at Power 5 programs, but at least Willie Taggart has pulled a Harry Truman, saying the buck stops here.

Taggart has repeatedly said FSU’s loyal fans deserve better and has pledged improvements. During his interviews with players and staff last week, I have been told Taggart owned up to his shortcomings. He admitted to missteps and, at times, did not follow his own mantra where playing time on games days was based off of competition on the practice field. 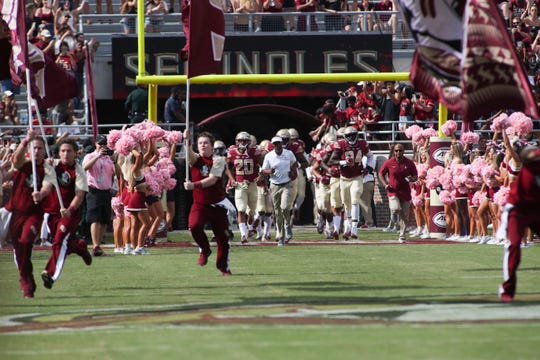 The expected changes on the roster and coaching staff have already started.

Of course, the biggest news has been the departure of offensive coordinator Walt Bell, who Monday was named the head coach at UMass.

Finding Bell’s replacement could define Taggart’s future at FSU, and reports suggest former Ole Miss head coach Hugh Freeze is a favorite. Freeze, 49, had a 39-25 record in five seasons with the Rebels before resigned in July 2017 after violating the morals clause in his contract. Cleared by the NCAA, Freeze has also been linked to at least five jobs, including at Tennessee and Liberty.

While Taggart likes his fingers on the offense, he certainly not bashful about making changes. Over Taggart’s nine years as a head coach, his offensive staff has featured 11 different coaches in quarterback, offensive coordinator or co-offensive coordinator roles. That trend is open for debate, but everyone says he’s willing to listen and learn.

Taggart is a gifted, likable guy, a legit family man who is building a nice home in Golden Eagle.

Taggart has done plenty of things right during his first year at FSU. But he obviously needs to correct the things he has done wrong.

FSU is squarely in his corner. Fans need to be, too.

The Seminoles’ success and brand depend on this working.

Jan. 16, 2018: Taggart completes his coaching staff with the hire of Walt Bell as OC/QB coach.

July, 28, 2018: FSU holds first Saturday Night Live recruiting event with more than 70 of the top prospects in the country.

Sept. 8, 2018: FSU gets first win of the Willie Taggart era against Samford.

Oct. 6, 2018: FSU blows 20-point second half lead to lose to Miami for the second straight season.

Oct. 27, 2018: FSU suffers worst home loss in program history with 59-10 loss to Clemson. Taggart calls out players for quitting on the team during the loss.

Who did OL William Putnam sign with?
Preview: FSU to Face Billikens in Orange Bowl Classic