Michigan was the most impressive team in the ACC-Big Ten Challenge. Here’s 21 more awards from a fun three days.

Well, wasn’t that fun? The ACC/Big Ten Challenge came and went with seven games decided by one possession or in overtime, with three unranked teams upsetting ranked opponents, and a 7-7 split in victories.

Top game prize . . . Florida State went from 18 ahead of Purdue to eight down to winning 73-72. The Seminoles managed all that with only one player scoring in double figures – M.J. Walker with 13 – but eight contributing seven points or more. Accepting this on behalf of the Seminoles is Trent Forrest, who also takes home the “Best 16 seconds award.” He had no points, rebounds or assists in the second half, until the last 16 seconds, when he forced a turnover by tying up Boilermaker Ryan Cline, hit a floater for the game-winning shot, and stole Purdue’s last pass.

Best of show . . . Duke was dazzling enough against Indiana, but this goes to Michigan, for crushing North Carolina 84-67 in a match of top-11 teams. The Wolverines gave the Tar Heels a 10-point head start, then outscored them 73-46 in the final 32 minutes. That number sound familiar? Michigan earlier plastered Villanova 73-46, so the Wolverines have beaten the past two national champions by 17 and 27 points this month.

Best dressed team . . .  Penn State. The Nittany Lions came out in black and pink against Virginia Tech – a tribute to the school’s original colors way back when. The 63-62 upset of the ranked Hokies was their sixth consecutive victory in the color scheme. 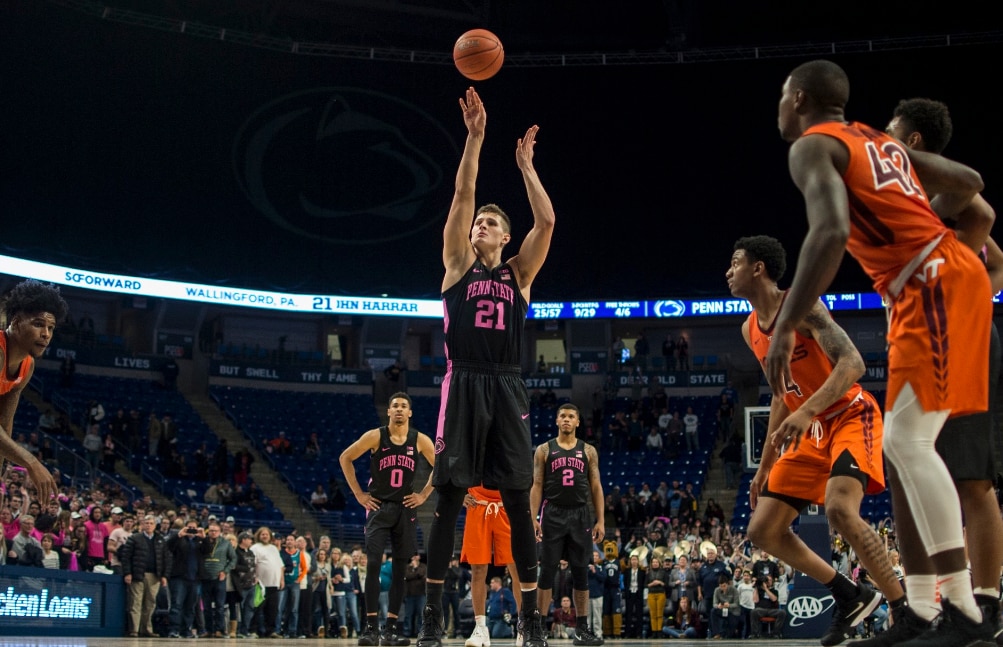 The Namesake Prize  . . . Nebraska, who must be the only team in the nation starting three juniors. No, not members of the junior class, but James Palmer Jr., Isaac Copeland Jr. and Glynn Watson Jr. They combined for 48 points to beat Clemson.

Award for best continuing series . . . It was another episode of Dunkin’ with Zion in Durham. Duke’s Zion Williamson is collecting a library of SportsCenter-quality slams, but the steal and windmill jam on Indiana was particularly a keeper. Good thing the Cameron rims are newer than the Cameron walls. His explanation afterward: “They (Indiana) stopped running, so I said, `You know, let’s give the Crazies a little something to cheer for.”’

Yeah, You Can Stay Trophy . . . Louisville’s Chris Mack. The overtime upset of Michigan State made 50 November home victories in a row for the Cardinals, going back 28 years. The fans love to see winning streaks continued, especially with what the Louisville program has gone through lately, so this was a first-rate way for a new coach to prolong his honeymoon. “They wanted a game like this, wanted some good news around here,” Mack said.

This ain’t high school anymore ribbon goes to . . . Foster Loyer. The Michigan State freshman was a 90 percent free throw shooter in high school and once made 119 in a row. He was at the line with 36 seconds left at Louisville, the Spartans ahead by a point and badly needing some breathing room. Miss.

Earning the right to wear the badge Who Saw Me Coming? . . . lots of guys.

Boston College’s Nic Popovic came off the bench to hit all nine shots and score 18 points in the second half — the same half the entire Minnesota team was going 8-for-34 and scoring 24 points. Penn State freshman Myreon Jones, who scored 14 points in his first five college games combined, threw 18 at Virginia Tech. “We all knew it was going to come, we were just waiting on it,” said Penn State veteran Lamar Stevens. Iowa’s Nicholas Baer, who went into the game with a 4.8 average, scored 11 Hawkeye points in a row in the second half to beat Pittsburgh. Ryan McMahon’s season high for Louisville had been eight points. He put 24 on Michigan State.

The Sure Hands trophy to . . . Virginia. Two turnovers in the 76-71 win on the road at Maryland. Two. That makes four games this season the Cavaliers have had five or fewer turnovers.

“A win is a win – I don’t really care how much we score. At the same time, we can play with any team in the country however we want.”@kylejguy5 and @UVAMensHoops are locked in 🔒. @TheAndyKatz pic.twitter.com/cM4hdav3wA

The Defense is big in any language prize  to. . . Rutgers. Nine different languages are spoken on the Scarlet Knights roster, from French to Arabic to Dutch. They all translate into one fact: Rutgers knows how to stop people. Miami had not been held under 78 this season but Rutgers shut down the Hurricanes on their own floor, 57-54. This, with a young team that came into this season tied for 316th in the nation in experience. It’s the same defense that gave up four points in the first half to Eastern Michigan, in a 63-36 win.

No Place Like Home honoree is . . . Illinois. The close loss at Notre Dame means the Illini still have not won a true road non-conference game since 2014. And the news is not much better when they play in the league. They are 8-28 on the road in the Big Ten during that period.

The Hope the selection committee was watching certificate to . . . Nebraska. The Cornhuskers won 22 games last season, went 13-5 in the Big Ten, and were still not invited to the NCAA Tournament. Winning at Clemson is like a flu shot against the left-out virus. “We’re headed for high places,” Isaac Copeland Jr. said.

Wrong time, wrong place award . . .  poor Indiana. The Hoosiers caught Duke coming off a loss, and in Durham to boot.  The Blue Devils are 11-1 after a defeat going back to 2016-17, with their winning margin 21.3. They have also beaten 142 non-conference opponents in a row. Their 90-69 whipping of Indiana included the Hoosiers committing 13 turnovers in the first half and falling behind 53-29 at halftime.  “They’ve only won probably 95 percent of their games here over the last 45 years, so I think at some point in time, give their crowd a little credit,” Indiana’s Archie Miller said.

Mr. Blunt Award . . . We have a tie. There’s Michigan State’s Tom Izzo’s verdict after the loss at Louisville: “Tonight we didn’t do the little things. Maybe we’ll learn from it, maybe we won’t.” And North Carolina’s Roy Williams, after the pounding at Michigan: “Right now, we stink.”

The Grass is not so green on this side award to . . . Maryland. The Terrapins were 10-5 as an ACC team in this event. Since switching leagues, they’re now 0-5 as a Big Ten member.

Frequent flyer gold card . . . Miami had just played three games in four days at a the Wooden Legacy in Fullerton, Calif., then flew from sea to shining sea to play Rutgers at home. As coach Jim Larranaga observed, “The flight over is 3000 miles, the flight back is 3000 miles.” Not easy travel for a team with a seven-man rotation.

One-man gang prize . . . Georgia Tech’s Jose Alvarado scored 24 points in the 67-61 loss to Northwestern, tied for second high of the entire ACC/Big Ten Challenge. The rest of the Yellow Jackets starting lineup had 10.

Misleading stat trophy . . . Let’s see, there was Michigan State outrebounding Louisville 47-30. And losing. Maryland shooting 54 percent, while scoring 71 points on a Virginia defense that had not allowed any previous opponent to break 60. And losing. Pittsburgh outshooting Iowa in percentages, 47.3 to 36.5. And losing. Ohio State getting 16 more free throws than Syracuse. And losing by 10.

Finally, the Blown save award . . . step forward, Purdue. Had the Boilermakers been able to hold an eight-point lead in the final four minutes at Florida State, and not gone 7-for-14 from the free throw line in the second half, the Big Ten would have carried the Challenge 8-6.

Instead, it ended up even. Probably more appropriate.

FSU football gets five different ACC Player of the Week honors
FSU’s Ricky Aguayo on upcoming game against Florida: ‘We hate those guys’