No. 11 Florida State upset by Pittsburgh 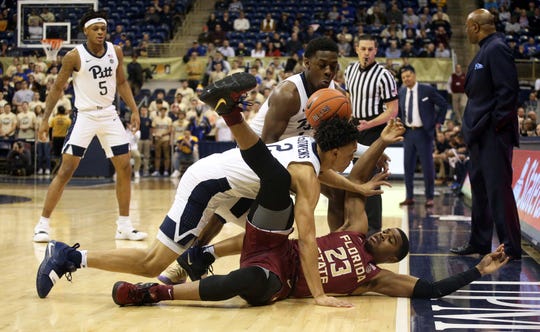 Sometimes it’s just not your night.

The Seminoles fell 75-62 to the Panthers before a Peterson Events Center crowd of 6,780. It was FSU’s third ACC loss in its first four conference games. Pitt’s previous victory over a team in the AP Top 25 came against FSU on Feb. 18, 2017.

More than half of Pitt’s points came from the free throw line.

Pitt came in to the game averaging 18 free throw attempts per game, but more than doubled that against the Seminoles.

FSU forward Mfiondu Kabengele fouled out with more than seven minutes remaining in the game, and center Christ Koumadje spent most of the game in foul trouble as well. The duo combined for 16 points, while Koumadje had a game-high 11 rebounds in 20 minutes.

Pitt guard Trey McGowens had his second 30-point outing in his last three games with 30 points and seven rebounds. He attacked FSU’s interior and also made 18 of his 19 free throw attempts.

McGowens wasn’t the only Panther to find success driving the lane though.

Guard Xavier Johnson finished with 18 points and was 10-for-10 at the line.

FSU shot well in the first half and were able to stay in the game despite the free throw advantage. But the second half it seemed like the Seminoles were playing with a lid over the rim.

They shot just 23.5 percent from the floor and made just one meaningless three despite 14 attempts.

FSU made 2 of 22 three-point attempts in the game.

Pitt didn’t shoot well either. The Panthers shot 34.8 percent from the field and 29.4 percent from beyond the arc. But it didn’t matter with how often the Panthers got to the free throw line.

Junior guard Trent Forrest tried to keep the Seminoles in the game, leading the team with 19 points. But wasn’t enough. He also added nine rebounds and four fouls.

No other FSU player ended the game with double digit points.

FSU held the advantage in almost every statistical category in the first half. But it trailed 36-34 at the break because of Pitt’s success at the free throw line.

Kabengele and Koumadje were both on the bench for the majority of the half due to foul trouble.

The lack of size inside led the Panthers to attack the basket, which led to most of their free throw attempts.

It was the Seminoles’ second loss in as many days after their 80-78 loss to No. 1 Duke Saturday.

Big issues: FSU doesn’t have its normal size in the frontcourt.

Koumadje is the only true center on FSU’s roster, but Kabengele has been filling the role of center behind him. When both of those big men are in foul trouble, the Seminoles don’t really have an answer.

Forward RaiQuan Gray has been filling in as a big man this season, but that’s not really his game. He has the size, but he’s more of a stretch player than an inside presence.

Kabengele and Koumadje both pick up fouls at a high rate and teams are going right at them to get them in foul trouble. That’s what happened Monday and the Seminoles weren’t able to respond.

Both players have to realize the position that the team is in and be more conscious of when to foul and contest and when to let it go.

FSU will travel to Chestnut Hill, Mass., to take on Boston College at 2 p.m. Sunday. The game will be broadcast on ESPNU.