No. 9 Florida State crushed by No. 2 Virginia 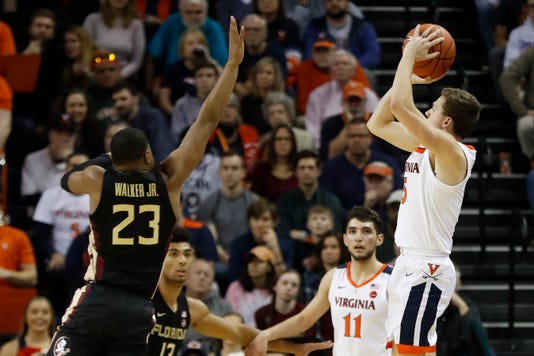 Florida State is going to want to forget about this one quickly.

It was FSU’s worst offensive performance since a 58-44 loss to Virginia in the ACC Tournament in March 2015, and the final score was much closer than the game.

FSU entered the game averaging 81.3 points per game, but couldn’t buy a basket against the Cavaliers. The previous low scoring output for the Seminoles was 60 in the 66-60 loss to Villanova.

Compare that to UVA shooting 40.4 percent from the field and 43.8 percent from three. UVA guard Kyle Guy had his way with the FSU defense making seven of his 11 shots, including five threes. He finished the game with 21 points.

The Cavaliers also shot 88.9 percent from the free throw line.

The game started off well with the Seminoles jumping out to an 8-4 lead, but that didn’t last.

UVA finished the half on a 39-15 run with FSU struggling to hit shots from the field and from the free throw line.

The Seminoles shot just 31.6 percent from the field and made just eight of their 15 free throw attempts. They knocked down just six of the 19 shots they took.

UVA knocked down as many threes (six) as FSU did shots in the first half. The Cavaliers shot 50 percent from beyond the arc and 48.1 percent from the field.

FSU’s two most experienced players, Phil Cofer and Terance Mann, were sidelined with foul trouble. Mann — who led FSU averaging 13.1 points per game — played just three minutes in the first half after picking up two fouls. He didn’t start the game.

The second half was a little more competitive with FSU not allowing the Cavaliers to extend the lead by much in the second half, but the Seminoles weren’t able to close the gap until the final minutes.

The Seminoles continued to shoot poorly in the second half making just 36 percent of their shots from the field.

Trent Forrest and Mann combined to score just a single point in the game and neither player scored until 30 minutes of game time had passed. Mann didn’t score at all for the first time in his last 65 games in an FSU uniform.

This was the worst FSU has looked since the end of the 2017-18 regular season. The Seminoles couldn’t knock down shots and UVA didn’t miss. The Cavaliers defense created a lot of problems for the Seminoles limiting the good looks on offense, but FSU wasn’t able to knock down most of the ones it did get.

FSU can afford a couple players having an off game because of the depth that it has, but no one was on their game in this one.

The Seminoles are a much better team than they showed in this game, but this one is going to sting for a while.

FSU returns home to take on Miami at 9 p.m. on Jan. 9 in the Seminoles’ ACC home opener. The game will be on either Fox Sports South or Fox Sports Sun.

No. 9 Florida State falls 65-52 to No. 4 Virginia
Where Willie Taggart ranks among first year coaches