Practice success not translating to games for Florida State 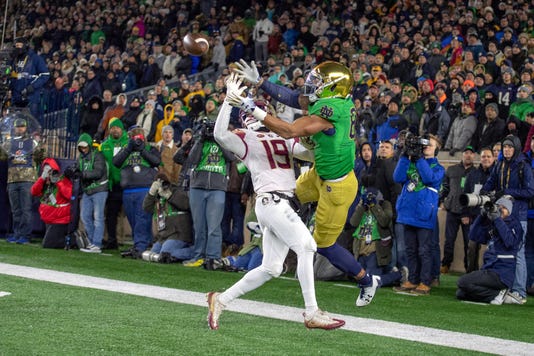 Florida State is fighting for its postseason life Saturday against Boston College.

The Seminoles (4-6, 2-5 ACC) are one loss away from posting their worst season record since 1975 and one loss from ending a bowl streak that started in 1981.

Despite the struggles, FSU coach Willie Taggart still believes in the direction that his program is heading in his first year.

“We’ve got to stay true to the plan and vision that we have for our football program,” Taggart said.

“Just because it’s not happening right now doesn’t mean it won’t happen. We’ve got to stay focused and stay locked in and continue to stay true to the vision to what we see in this football program.”

FSU’s players are still working hard to try and fix the issues that have plagued the Seminoles (4-6, 2-5 ACC) this season.

Taggart has been pleased with the way his team has responded during practice this week after three straight blowout losses to No. 2 Clemson, North Carolina State, and No. 3 Notre Dame.

“That’s something with our team,” Taggart said.

“They practice hard each week. This week had a lot of energy. That hasn’t been an issue for us. We just have to transfer that onto the field on Saturdays.”

The problem is that FSU’s success and effort on the practice fields hasn’t translated into success on the field.

And FSU’s coaching staff and players can’t seem to figure out why.

“I even posed that question to the defensive staff and even the defensive unit. I said, ‘It has to start transferring over.’ They always say you play like you practice so at some point it’s going to click for us, we’re going to catch momentum and we’re going to move forward and be the team that we want to be.”

The team continues to make numerous mistakes each game that’s affecting their ability to be competitive.

Against Notre Dame, the Seminoles committed just five penalties, but had to use all three timeouts to avoid penalties for having too many players on the field or lining up improperly.

It’s the same issues that have plagued FSU all season, but it’s not the same culprits. Different players keep making the same mistakes.

“It’s someone different. What’s frustrating is we have not played consistently enough, everyone, to be on that same page. It could be a good drive. It could be someone with a false start. It could be covering up a potential receiver downfield.

“There’s a lot of those little things that stops drives or turnovers. So we’ve got to play cleaner football. Stay focused the entire time we’re out there.”

FSU isn’t having those issues in practice, and Taggart hopes that this is the week that the Seminoles can finally put it all together.

Because now is when they need it the most.

“Yeah, they just do it on Saturdays,” Taggart said.

“They know how to do it, they know how to play football. We’ve just got to execute consistently enough on Saturdays and do the things it takes to win ball games, and we haven’t done it yet. We have a great opportunity back here at home to do it.”

Florida State vs. No. 22 Boston College

The Seminoles continue on the recruiting trail as they prepare for BC
Boston College Eagles vs. Florida State Seminoles Prediction and Preview